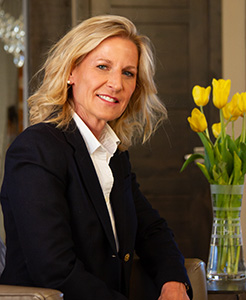 Anne grew up in Madison, Wisconsin and she is a first-generation US Citizen as her parents immigrated from Norway shortly before she was born. Anne’s parents’ Norwegian roots were linked closely with the love of the outdoors – hiking and skiing, which drew her parents to have a mountain home in Breckenridge.

Anne graduated from the University of Wisconsin – Madison where she studied Journalism and Mass Communication. Anne excelled as a top-performing sales professional with 25+ years of successful experience in the healthcare and consumer goods industries. Anne’s skills in business development, account management and territory growth were keys to her success. Anne’s engaging and professional style enabled her to build strong client rapport and lasting relationships.

In addition to her previous full-time career, Anne served as the Honorary Consul of Norway for the State of Wisconsin. As the first woman to hold this position in Wisconsin, Anne was very instrumental in facilitating Norway’s interests in Wisconsin and building strong ties with Norwegian Ambassadors to the United States and leaders within the State of Wisconsin. As a result of Anne’s outstanding service to the Kingdom of Norway, Anne was appointed Knight First Class of The Royal Norwegian Order of Merit by his Majesty King Harald V of Norway.

Sign up for CBMP newsletters to receive the latest real estate news, including market reports, selling tips and tools, and trends.